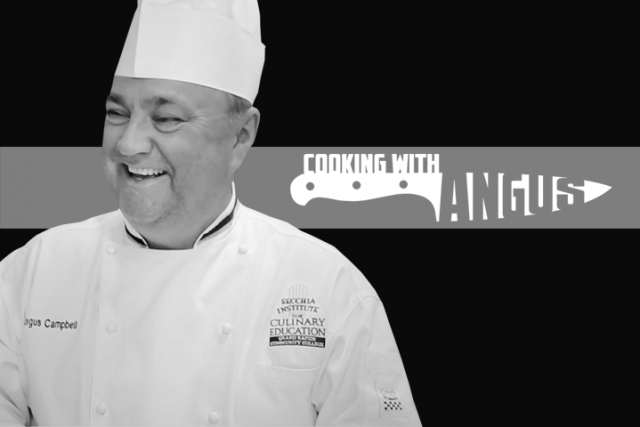 Grand Rapids Community College and the Secchia Institute for Culinary Education will be represented in a new television show on WZZM 13.

“Cooking with Angus” is a 12-part series featuring GRCC’s Secchia Institute for Culinary Education. The show will air at 11:30 a.m. Sundays on WZZM 13. The first episode aired Feb. 21. The series follows GRCC Chef Instructor Angus Campbell and two students, Megan Garstecki and April Loya, learning about food preparation first-hand in Italy and Scotland. All episodes will be uploaded to www.cookingwithangus.com after each showing, where visitors can stream for free.

“There is nothing better for learning about regional cuisine than to travel to a particular location and experience it for yourself,” Campbell said, who has taught at GRCC since 1991. “While we do a tremendous job of teaching basic skills in the classroom, immersion in a culture is, by far, the best way of learning a new cuisine.”

Since 2000, more than 100 “Cooking with Angus” programs have aired on GRCC’s cable access channel, College Channel.

In order to bring the work of GRCC and the culinary program to a wider audience, Peter Secchia, after whom the culinary program is named and who is also the founder of the amphitheater in the ATC, suggested that GRCC look into what it would cost to put the show on a local broadcast station.

“Once we determined the ideal content for 12 shows, which are centered around two culinary students traveling abroad and learning hands-on, Peter Secchia agreed to fund half the cost if we could raise the other half,” said Klaas Kwant, Video Content Production Manager for GRCC.

Some of the funds for the other half of the cost came from donor, Jay Smith, who has funded quite a few scholarships for culinary students. When the funds were raised, Campbell connected with individuals in Scotland and Italy to determine what would be recorded for the show.

“I think it is a wonderful way to get GRCC in front of the general public,” said Dan Gendler, Program Director of the Secchia Institute for Culinary Education.

The director/editor of the show is Coordinator of Video Production, Noah DeSmit, who has worked with Campbell, planning for over two years, determining the content for each program. Together, DeSmit and Kwant shot the footage.

“For me, this feels like a fantastic progression from where we started in 2000,” Kwant said. “The ‘Cooking with Angus’ programs have had several directors, each of whom has taken the quality up a notch. I think Noah has taken it up several notches, and I’m very happy to be a part of something that reaches more of the individuals in Kent County, who our college serves.”
“We have to constantly demonstrate the value of this place to our community, and I think this program, both the culinary portion and the GRCC promos included within it, do this very well,” said Kwant.