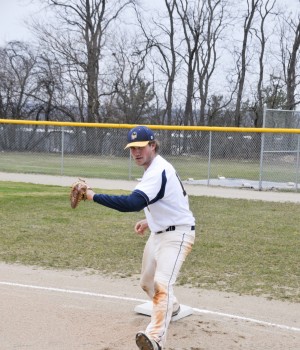 Normally when someone spends time with their mother or grandmother at a young age, it usually involves reading a book or maybe drawing a picture.

For Brenden Johnson, it was how he got his inspiration and love for the game of baseball.

Johnson, a 19-year-old Grand Rapids native, graduated from Northview High School, and will be transferring into Aquinas College in the fall to not only continue his baseball career, but earn his major in communications.

Johnson’s mother, Cheryl Johnson, is a single mother to not only Brenden, but also sister Brooke, and brother, Brett.

“I got into baseball from my mom and she used to play softball at GRCC way back in the day,” Johnson said. “I started playing catch with my grandma when I was 5 and my love of the game just grew from there … I’ve basically had a bat in my hand from day one.”

Johnson was a catcher at Northview and in his first year at GRCC, but this year he’s trying something a little different.

“This season I’m really looking to work on the defensive side since I’m making the switch from catcher to first base for the first time in my career,” Johnson said. “I’m doing what the team needs me to do and whatever can help us win.”

Last season, Johnson had a batting average of .281 in nine of 32 at bats with a .344 slugging percentage while adding seven runs batted in. In the field he only commit- ted two errors with a .950 fielding percentage.

Coach Mike Cupples has been happy to coach Johnson, and thinks his character off the field has a lot to do with the role he can play on the field.

“Brenden had an injury last year behind the plate as a freshman that he has overcome very nicely,” Cupples said. “He’s moving to first base this year for the team and I think that will free him up a bit more and really allow him to show his leadership skills.”

Other than improving his game, Johnson believes the team is improving due to its chemistry.

“We have a lot of guys who work extremely hard to better themselves and that’s something we just lacked last season,” Johnson said. “It really feels like we are getting closer together as a team.”

When it comes to actually playing on the field, Johnson is already seeing some changes from a year ago.

“We are improving in every aspect of the game, but where I really notice it is pitching,” Johnson said. “It helps to have another coach who works with our pitchers (Wes Germaine) because pitching wins ballgames.”

Through all of his years of playing, there was one specific highlight that stuck out to Johnson just a year ago.

“My first home run was a big milestone for me because I worked hard for years for that moment,” Johnson said. “It came last year against Ancilla and it really is the best feeling you can have.”

With the season creeping closer, Johnson is ready to finish strong at GRCC and continue on his career.

“I’m just looking forward to a great season and to carry success into next season when I play at Aquinas,” Johnson said. 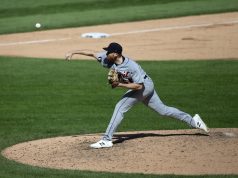 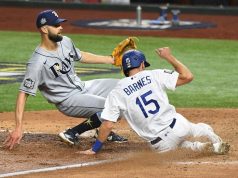 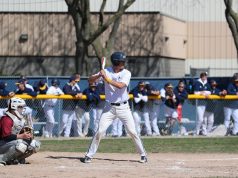 GRCC baseball coach speaks on how COVID-19 is affecting the future.