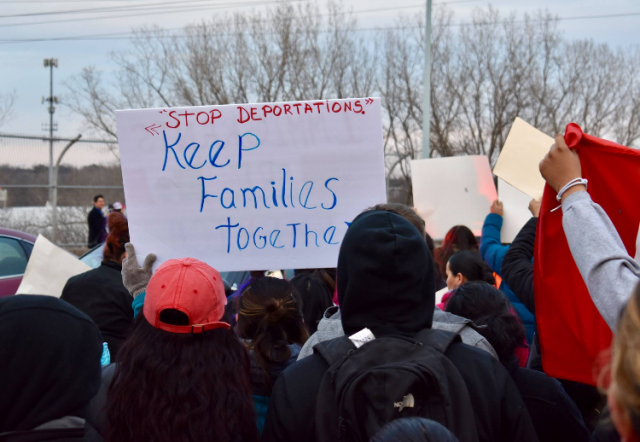 “A day without immigrants,” was a major protest that occurred all day Feb. 16. The posters could be seen all around the country, it is happening everywhere not just in major cities around the country but in smaller cities as well.

The boycott said to NOT attend work, NOT open up their businesses,  NOT to shop online or in stores,  NOT to eat at restaurants, to NOT buy gas, SKIP school, and for parents to NOT send their kids to school. The final part of the poster said something very meaningful: “We might lose a day of work but we will win so much more.”

I went to Lee High School a school where the majority of the population is Latino. I spoke to the principal, Kathryn Curry, and she had some inspiring words on the situation.

“It’s definitely having an impact on our attendance,”  she said, “but I think it has a far more impact on the fact that this protest is really giving people the opportunity to have voice and share their thoughts and opinions for a common cause. Our country was built on struggle and protest and the right for freedom of speech.”

Curry said she appreciates the significance of past protests that inspired change that directly impacted her life.

“Me personally, had it not been for people struggling in protest on behalf of African-Americans, I would not be sitting where I am today.”

Curry comes from African decent and said if it weren’t for the countless protests that happened she would not be anywhere near where she is now, a principal. She also said something very deep that will make people see things a different way, she said, “If it weren’t for protests I’d be sitting in the back of a bus today.”

Curry said she is “very worried about the future as to what is going to happen due to the president.”

Valedictorian and class president of Lee High School, Walter Aguilar said the protest will have a big impact on the community.

“This protest will have a big impact because it’s the first of many protest and it’s all over the nation,” Aguilar said. “It will affect the economy, presence, and schools.”

Aguilar’s family comes from El Salvador although he himself is a legal citizen he still is a strong supporter of the protest and the meaning behind it.

“This protest has an impact in me because it’s something that affects my family, friends and community. They have been so discriminant lately, and they’re just as human as anyone else.”

Aguilar said his life has changed since the election of Donald Trump as U.S. President.

“People think it’s okay now to discriminate, and show bigotry,” he said. “Just at work I’ve seen so many people come in with confederate gear and it’s really scary.”

“Without protests President Obama would’ve been sitting in the back of a bus. Women would’ve never been able to vote, and now it’s time to show another cause that will not be left silent.”

I also participated with the protest by not going to school. I strongly believe that protests are the way to go. They are what led African-Americans and women to the rights they have now. So why not all latinos and all immigrants from all countries stand together to fight against the discrimination against all immigrants from around the world?

A lot of immigrant families have been living in fear thinking every day is their last in the United States. They have prepared and made arrangements with other family members or friends that can take care of their children if anything were to happen in the near or far future. My family have taken some precautions but have not gone too far into it because they don’t want to think about what might happen. People are now worrying more and more about things they did not have to worry too much on before the election.

Families are getting separated, young children are being left with friends of their families or in foster homes wondering where their parents are. Children are wondering why their parents look worried and scared whenever they see a cop or anyone in uniform. This protest is important for all immigrants not just the Latino immigrants but European and Asian immigrants as well. This gives people who we’re scared to speak out a feeling that they are doing something. This protest is the first of major protest immigrants will be doing.

I can’t wait to see what else people get together for a joint effort. People are finally getting together again and fighting for what they want.