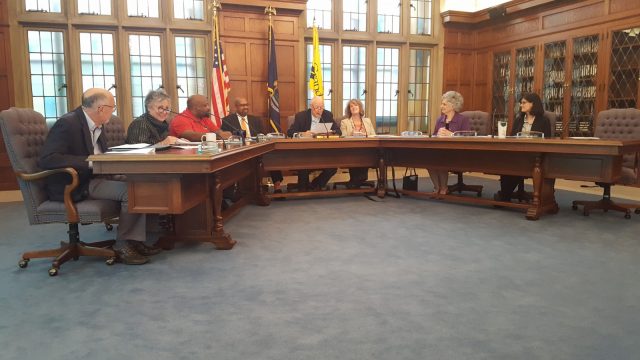 During his first day as the new president of Grand Rapids Community College, Bill Pink met with the GRCC Board of Trustees to discuss the new budget proposal.

Lisa Freiburger, the VP for Finance and Administration, led the board through a powerpoint that went in depth on different aspects that are affecting the 2017-18 budget.

Freiburger briefly touched on the 2016-17 year budget. Although enrollment was less than expected, the budget for salaries and fringes have been spot on if not under spent.

Although there are few worries over the proposed 2017-18 budget as the college administration is expecting a further drop in enrollment.

“There has been a 4 percent decrease in billing units,” Freiburger said. “The billing units are the same as contact hours that students pay tuition for, so less money is coming into the system.”

The board has also set the tuition rates to increase by 1.8 percent.

The board also expects that there will be $500,000 in salary costs saved from unfilled positions.

“As of right now there are about 10 open positions that could be funded by that sum,” Freiburger said. “But that could vary throughout the year.”

The board also discussed the plan for if the enrollment rate is even lower than the 4 percent decrease.

“We have about $1.8 million in our stabilization fund if something like a lower drop in enrollment or others things are to happen,” Freiburger said.

A full review will be provided at the next Budget Work Session June 5 . More information about the proposed budget can be found here.