The Grand Rapids Community College women’s volleyball team is off to an impressive start this season, rattling off three victories in a row.

This year’s squad comes into this season ranked 13th nationally, according to GRCC’s Athletics.

According to GRCC’s Athletics page, with two victories so far in conference play the Raiders are currently  No. 1 in the MCCAA West ahead of Kellogg Community College and Muskegon Community College who both have 1-0 records.

In Tuesday’s game against Kalamazoo Community College, Kendra DeJonge led the way with seven kills while teammates Hannah Stearns and Ally German were right behind her with six. Stearns also had four blocks, while Lauren Helsen contributed well with 18 total assists. Helsen sisters combined for 15 digs.

With good teamwork and execution, the Raiders start off the season undefeated overall and in conference play.

Now sitting with a 3-0 overall record and the top spot in the conference, the Raiders get a few days to rest before heading to the 20th Annual Owens Express Tournament in Toledo, Ohio, starting Sept. 1. 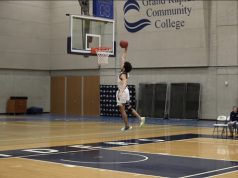 GRCC Men’s Basketball stay above .600 in win over LMC

What’s happening in GR this weekend?