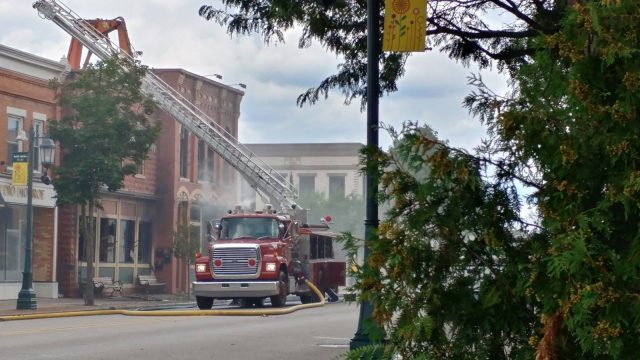 Yesterday on August 14, at around 6 a.m. one of the biggest  Rockford landmarks, The Corner Bar caught on fire from an explosion caused by the gas meter catching on fire.

Director of Public Safety of Rockford, Dave Jones, said the fire started when a dumpster behind the building caught fire, causing a nearby gas meter to explode.

The public safety officers were able to put the dumpster fire out, but were not able to extinguish the fire on the gas meter, as it was a gas source.

When DTE Energy was called to shut off the gas, they were unable to find the gas

valve. The building burned for several hours before DTE was able to turn off the gas from the street.

The public safety department had to tear down almost 60 percent of the building due to the damage.

The Corner Bar has been around for over 66-years and has become an icon to the Rockford community for their famous hot dogs and atmosphere.

A manager of the Corner Bar, Emma Boehms, said that she woke up yesterday morning to hear news about the fire.

“We came down here immediately and it was busy. There was a column of smoke you could see from miles away,” Boehms said. “At that point is when some of our staff showed up and our food distributor and some local businesses rallied together and we did hot dogs out of a tent.”

In honor of this tragedy, Uccello’s will be hosting a fundraiser for the workers of the Corner Bar.

The decision to help out another local business was made between Sergio Uccello, Director of Marketing Brittany Knoch and General Manager Laine VanDyken.

“As soon as all this was happening we hopped on a call altogether and we were like what can we do, what do we need to do to make sure we are able to help out where we can. Within hours of it happening we were already planning it,” said Knoch.

The fundraiser will be held from 4 p.m., Aug. 17 until 2 a.m. Aug. 20. Uccello’s is giving 15 percent of their sales both dine-in and take-out to the Corner Bar. There will also be a donation jar placed in the restaurant as well.

Uccello’s is also offering temporary employment for employees displaced by the fire. For more information, call (616) 866-0666 or email at rockford@uccellos.com

“We’re all just coming together, as like a family making sure that our neighbors are well supported,” Knoch said. 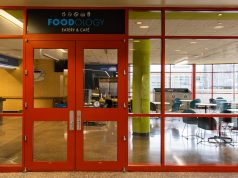