Hurricane season has overstayed its welcome this year.

Just a couple weeks ago the United States and Caribbean Islands faced a life threatening hurricane that left behind global devastation and billions of dollars in damages.

Now with two more on the way, Hurricane Jose (located a couple hundred of miles off the East Coast) and Hurricane Maria, (southeast of Puerto Rico and the Virgin Islands). Cort Scholten from the National Weather Service of Grand Rapids says “It’s normal to have hurricanes in September, but this year is running above average”.

A recap of the past few weeks begins when Houston was struck by a category 5 hurricane on Aug. 17. Two weeks after on Sept. 8. Irma blasted  the shores of the Caribbean Islands and Florida.

As a result, there was an evacuation alert of all Florida residents in the pathway of this raging storm issued on Sept. 6, which continued until the storm had passed.

Flight prices began climbing over $1,000. Lines for gasoline extended out into the streets, leaving motorists in cities including Miami and Fort Lauderdale concerned about a gas shortage. Stores sold out of wood supplies and groceries as Floridians flocked to stock up on items they would need to prepare to ride out the storm.

“This storm will leave behind catastrophic damages,” said Jason Maples from the National Weather service of Grand Rapids. Roads were flooded, trees fell on houses, electric lines exploded, leaving residents scared and uncertain about when their homes would be safe again.

The storm was estimated to cause fatal damages to business, homes, property, vehicles, to both Florida and the Caribbean Islands. And has left millions of people without power.

For more information on donations you can visit  https://www.redcross.org/ns/apology/disaster_homepage.html 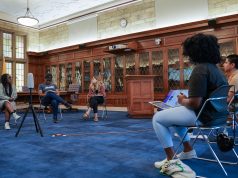