After, Harvey Weinstein quit his recent title as film studio executive he has been accused by several celebrities including Alyssa Milano and Lady Gaga started a social media trend by asking people who have been sexually harassed or sexually assaulted to write “ME TOO.”

At Grand Rapids Community College one the administration’s biggest goals is to raise  awareness of students, faculty and staff  about the Title IX conduct. Title IX Coordinator, Kimberly DeVries encourages students to review this guideline  and know which resources are available to them.

“One of the misconceptions that people have about sexual harassment is that it doesn’t happen to everybody, that it only happens certain people” said DeVries. “Anyone is susceptible to being sexually harassed.”

Title IX covers sexual assault, domestic and dating violence, sexual harassment, stalking, gender discrimination and several other areas. Anyone who found in violation of breaking the school’s policy will result in a sanction that can vary from a verbal warning or expulsion from GRCC.

“Reach out to somebody who has the resources to help you. said DeVries. “That’s  your faculty, that’s the staff around you, student organization advisors, me, campus police can help point you in the right direction to say this is not okay, let’s figure it out to make it okay.”

Students who are currently dealing or trying to overcome encounters of sexual harassment can contact many GRCC’s services such as the counseling center, student life center and several other services.

There are also several informational videos that for students who would like to spread awareness to other students and students who want to find help with a sexual harassment or sexual assault situation. 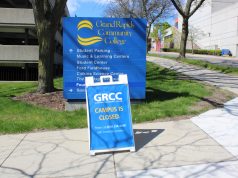 GRCC extending distancing learning for all of the summer semester, planning for “some” campus instruction for fall

The 1975 presents “Notes On A Conditional Form;” an album review