Friday the 13th has been known for its horror films and of things going bump in the night and it was fitting that “Happy Death Day!” premiered Friday, Oct. 13.

Rotten Tomatoes rated the movie a 64 percent on the Tomatometer, while The New York Times calls it “a snappy horror-comedy with a gentle romantic spine.” With the two ratings being almost polar opposites I found mine stuck somewhere in between.

Besides a few jump scares and seeing the main character die in different ways multiple times, I didn’t find anything scary about this film. Instead, the viewers got pulled into this circle of trying to rule out who the murderer was. The need to find out who it was that’s out to get Tree intensifies every time she repeats the day. And with each death, she continues to get weaker making it much more crucial for Tree to find her killer.

Take a look at the trailer of “Happy Death Day” here. 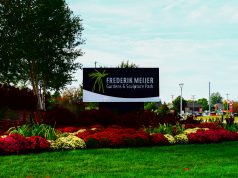