After a top 25 finish in 2016 for his piece titled “Leap Day”, Clark entered into the 2017 competition with experience and confidence. Clark’s 2017 entry could almost be considered a sequel to his 2016 artwork. Both entries were wooden tabletops with CNC milled designs cut into the wood.

Clark calls his 2017 entry “Left Right Center”. The piece consists of three wooden circles, each four feet in diameter and one inch thick. The circles each have a different design cut into the wood, but all stem from the same theme. Each circle has a central shape that almost ripples and radiates to the edge of the wood. The depth of the cuts into the wood gives the piece its rippling effect.

The designs used on the tabletops come from Clark’s ink drawings. He used many of his old sketches as inspiration into his final designs. Clark said he enjoys “channeling past work into its current state.”

“It’s as if I am mining my mind to see how far I can dig until I find gold,” Clark said referring to his continual improvements each time he sketches his designs. “I used to draw clocks.” But his art transformed into a design he wanted to be able to show off.

CNC milling uses a spindle attached to a machine, similar to a drill press, to cut into plastics or wood. The machine uses preauthorized coordinates from the operator to determine how the machine will cut the material, creating the depth, as well as, the patterns across the entire surface of the workpiece.

Originally, each circle was to be five feet in diameter, but Clark’s CNC operator could not produce his art in time.

With only two weeks left before the start of ArtPrize, Clark turned to The Geek Group, a National Science Institution, located right off of Leonard Street in Grand Rapids, to help him complete his artwork before the deadline. They were able to convert his drawings to fit a four-foot wooden canvas.

He then covered the Baltic birch wood with polyurethane to protect it and give each circle its beautiful finish. After the competition is over, Clark plans to add reinforced legs to each circle and seal in the wood with a sheet of glass three-eighths of an inch thick. Each circle took over 100 hours to complete, so Clark spent over 300 hours cumulative on his entry

Considering Clark is 41 years-old, and began his art endeavors at the age of 4, his 37 years of experience and participation in Michigan’s Youth Arts Fair helped prepare Clark for his rigorous work in producing his entry.

“I’d probably buy property up in Muskegon,” Clark said about his plans for celebration if he actually won. “I’m doing this for advertising and promotion,” Clark said acknowledging the fact that he didn’t expect win.

Perhaps Clark was being a bit modest since he finished in the top 25 in 2016 with a similar entry. His experience in last year’s ArtPrize resulted in his entry’s location. “Left Right Center” can be found at a side entrance of the Amway Grand Hotel off of Monroe Street right across from Mojo’s Dueling Piano Bar and Restaurant.

The pandemic isn’t over, but art fans are returning to Grand Rapids for ArtPrize 2021 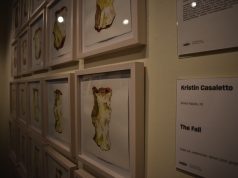