The Gender Equity Center has continued to grow since it was started last year by the Women’s Issues Now (WIN) student organization and campus organizers are hoping to find a permanent home for the resource that provides free feminine hygiene products, diapers, condoms and educational resources to Grand Rapids Community College students.

The center, located in room 412 on the 4th floor of the Main Building, is funded by fundraisers and donations from faculty, staff and local community organizations including Planned Parenthood.

While the center has been open for roughly a year, student leaders are still working hard to keep it open long-term while feeling a bit challenged to find a dedicated space.

“We have a hard time keeping this space,” said Tessa Dearth, President of the Women’s Issues Now organization. “A lot of professors or other staff members want to utilize this space for a meeting room, and it is difficult for us because we have to load up everything each time they want to do that. We want to make it bigger eventually, but in order to do that we have to get more publicity from the school…We don’t want to leave.”

Last year the Collegiate wrote a story about the Gender Equity Center finding a temporary placement and now is hoping to stay permanently at this location.

The center receives donations from and GRCC staff, faculty and several health clinics including  Planned Parenthood who provide educational brochures.

There are also several books located inside the room for people to read about topic ranging from baby essentials to books about feeling comfortable about your sexual status. Dearth, is hoping that in the near future that the center will be able to have enough books to possibly start a library.

“We were trying to find out a system where they can check out books, but that is it in the long run future,” Dearth said. “We don’t have enough books to check out and make sure we get them back. It would be nice to start a library in here.”

Dearth, encourages not only female students but male students as well, to check out the center and if needed, take some of the items.

“There(are) things for everyone,” Dearth said. “We encourage males to come in too because everyone thinks that we are anti-male but that is not the reason.”

The WIN also works with the StandOut LGBT organization and several other clubs to help out students here at GRCC.

“We try to collide with all of them so that we can accomplish something” Dearth said. “That’s why we also called our center (the) Gender Equity Center, instead of a women’s center because we didn’t want it to be exclusive just for women. Because anyone can be a woman first of all and second of all it is everyone’s issue.”

The center also assists students who also seek help with counseling by directing students to the counseling center and creating a network for students.

Dearth is also looking for people who would like to volunteer during the week to sit outside of the room and help people become more aware of what resources they have on campus. Those interested in volunteering can reach out by via W.I.N.’s website.

Dearth has committed herself to the only taking one class this semester to keep the center open.

Tomorrow the W.I.N. organization is holding an event called “Smash Pumpkin, Smash the Patriarchy.” It will be held from 11 a.m. to 2 p.m at Dr. Juan R. Olivarez Student Plaza (Bostwick Commons). Participants can provide donations which will be going towards a coinless feminine hygiene dispenser, funding towards the Gender Equity Center and an upcoming feminist art show. 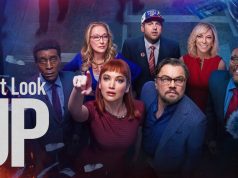 ‘Don’t Look Up’ has an eye-catching cast, but they fill a redundant film