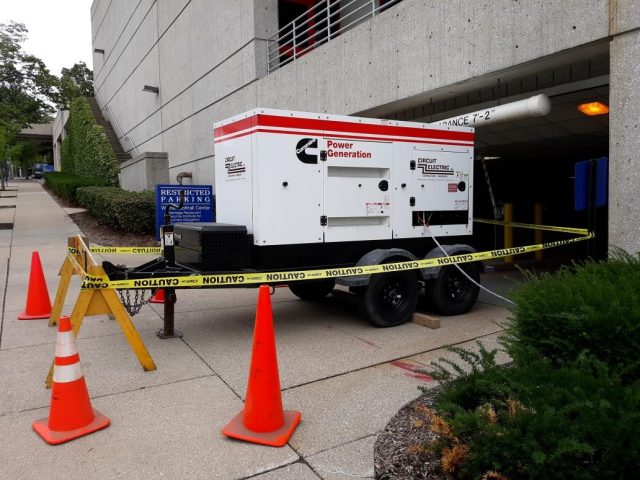 All classes and activities at Grand Rapids Community College’s Applied Technology Center and Spectrum Theater were cancelled Thursday, Sept. 12, as a result of both buildings experiencing power outages.

Both buildings, located on Fountain Street NE, were still without power and inaccessible to students Thursday evening. According to Roger Morgenstern, a media contact for Consumers Energy, power was expected to be restored “late (Thursday) or into the day (Friday).” According to Morgenstern, both buildings were part of a large power outage in Grand Rapids affecting approximately 1,800 people.

“I don’t have a specific reason (for the power outage), but it had to do with tree related damages,” Morgenstern said. The outage appears to be caused by trees being blown into power lines during the thunderstorm that rolled through Grand Rapids around 8 p.m. Wednesday, Sept. 11. A tornado warning was issued for the area during the storm. According to Morgenstern there were several power outages throughout Grand Rapids following the storm with approximately 30,000 people being left without power last night. That number was reduced to 9,000 as of 4:30 p.m. on Thursday. In reference to the 9,000 still affected, Morgernstern said that they are “expected to get the rest of the folks back online by tomorrow (Friday) night.”

Readers can get up to date information regarding current power outages in Grand Rapids, including those at GRCC, at consumersenergy.com/outagemap.

Thursday afternoon Gilles Renusson, who teaches an evening culinary class at the Spectrum Theater building, was busy stacking dry ice into the freezer of the building’s kitchen in an attempt to keep it cool and save the large amount of ingredients inside. Several others were around helping Renusson with this task.

Renusson expressed his disappointment at the fact that the building’s power was not yet restored but said that at the moment they were just focused on “trying to do as much as we can to not waste any ingredients.”

Renusson said the outage led him to reflect on the energy required to keep the campus running.  “It makes us think about how much electricity we use and plan Bs we need in case of emergency,” he said. “It is a crisis we have not dealt with before.”

Renusson said he was confident that the many people working hard to fix and help out in the situation would be able to get the power back on by tomorrow, and that once the power is restored they “would be back cooking” as soon as possible.

The Collegiate News and Feature Podcast: The Metallica Grant, The National Blood Shortage and Schools Requiring The COVID-19 Vaccine