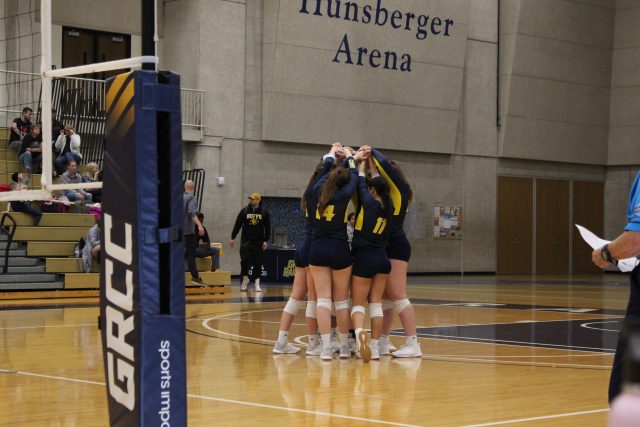 GRCC Raiders came out strong on Tuesday, Oct. 22, with a sweep against the Ancilla Chargers. Raiders defeated the Chargers 3-0. The scores at the end of the sets were 25-9, 25-19, 25-12. This win secured their position as conference champions.

During the first set the Raiders were on a roll and held serve for most of the set. Sophomore outside hitter Danielle Johnston was the server behind at least six points in the first set. Sophomore middle blocker and right side hitter Lauren Jonker seemed to find all of the blind spots for the Chargers, spiking back-to-back points on them.

The second set continued with another set of serving dominations from freshman outside hitter Annie Holesinger. However, the Chargers began a serving streak of their own, which was broken by a solid spike from Johnston.

They continued with their momentum from the previous sets, finishing out the third set 25-12, sweeping the Chargers.

The Raiders on the court move like they have one mind, constantly filling in the gaps for each other. Whereas there was some tension between the Chargers, during the first set, on the court.

On the sidelines the other girls cheer on their teammates throughout the game. “My teammates hold me to keep my energy up the whole game,” said Jonker after the game.

The Raiders now have an overall record of 23-6, their next home game is Thursday, Oct. 24, against Jackson College at 6:30 p.m.