The annual Comic Con will return to Devos Place in Grand Rapids to host comic book fans of all ages on  Friday Nov. 8 through Sunday Nov. 10.

The Con will feature celebrity guests such as Patrick Warburton known for  roles such as Joe on “Family Guy,” Brock Sampson on “The Venture Bros” and Kronk on “The Emperor’s New Groove” among other roles. The con will also feature Tobin Bell who portrays the devious Jigsaw in the “Saw” movies,. Along with Tony Todd of “Star Trek” fame also known as the voice of Zoom in The Flash” and the Candyman in the “Candyman” films. Dozens of other industry stars will also be in Grand Rapids for the con. See a full list here.

“This year will have a Frankenstein display in honor of the characters 200th anniversary,” said Mark Hodges, the show promoter, also highlighting scheduled appearances by Sara Karloff, daughter of Boris Karloff, one of the most well-known actors to portray Frankenstein’s monster.

Hodges said his event “is one of the top 10 shows in the midwest,” and he also admits “keeping up with it is one of the challenges of being being the promoter.” 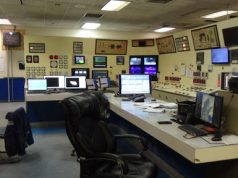 What made the NBA’s 2020 All-Star weekend so great?