Greetings Nightlighters, It is I, “the  perpetual dreamer” Jamie Miller here with yet another issue of Nightlight. Now, Nightlighters, as many of you know by now, I have done many many reviews. Some have been about movies, some about TV shows. But tonight, tonight I’m going to review something I have never reviewed before… an audiobook, and not just any audiobook Nightlighters. No, I’m reviewing “The Sandman.”

“The Sandman” which is based on the comic book of the same name written by Neil Gaiman tells the tale of Morpheus the living personification of dream, the literal sandman and his interactions with other supernatural characters and oddly enough superheroes and villains.

The comics which the audiobook is based on gave us another iconic character other than Morpheus….. One Lucifer Morningstar. Yes, the Lucifer who is the titular character  from “Lucifer” which I have reviewed on here.

The audiobook is done differently than most audiobooks, as instead of one long novel, it is done as a collection of many stories, based on those from the comics.

In addition to bringing good stories, The audiobook also brings many famous voices. James McAvoy who starred in “Glass” and Charles Xavier in the newer “X-Men” movies voices the titular role, Kat Dennings of “2 Broke Girls” fame  as the voice of Death who is dreams older sister and is basically the grim reaper but despite that is probably the kindest character in the whole series and takes the form of a beautiful young goth woman. Taron Egerton who has starred in the “Kingsmen” movies and as Elton John in “Rocketman” voices the role of John Constantine, a supernatural PI, and a fan favorite character. Michael Sheen has starred in such things as “Good Omens”, and two films in the “Underworld” series, Sheen plays the role of Lucifer Morningstar. Andy Serkis of “Black Panther” and “Star Wars” fame voiced Matthew the Raven, a inhabitant of “The dreaming” which is the realm of Morpheus and where we go when we sleep, to answer the question of a famous singer. Riz Ahmed known from “Nightcrawler” voices The Corinthian a vicious former  dweller of the dreaming known as a nightmare with mouths where his eyes should be who fled the dreaming and has become a serial killer in our realm. And series creator Neil Gaiman narrates.

All and all this audiobook is phenomenal. The actors voice their characters to perfection, especially McAvoy and Dennings. The music was phenomenal, everything was just phenomenal. The only problem I could find with it was how they Pronounced Constantine’s last name, as far as I can tell the I is silent. But they kept using the I when they said it. And it seemed a bit long at times as the whole thing is in all ten hours and 54 minutes. But other than that it is awesome. I give it nine torches out of ten. You need to listen to this. Granted it is a bit long and you need an audible subscription to listen to it. But trust me… it’s worth it.

You Can Run But You Can’t Hide: A Review of the “Americas Most Wanted” Revival 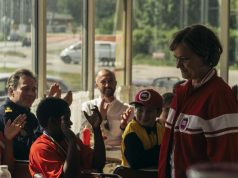