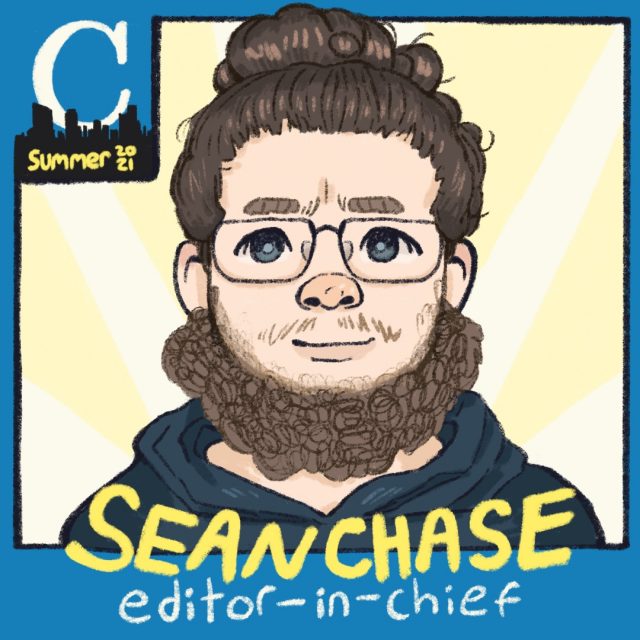 Hi everyone! Welcome to Five Questions and a Sketch. Today we are introducing the new Editor-in-Chief for the Summer 2021 semester, Sean Chase. Chase is a 31-year-old military vet and sports fan from Grand Rapids studying Journalism here at GRCC. He likes to spend his free time hanging out with his family, playing Minecraft, and listening to music, specifically “Don’t Need Time” by Hotboii.

You might recognize his name from the dozens of stories he has written for The Collegiate. You can read some of his favorite stories here, here, and here.

You can get in contact with Sean with story ideas and tips at seanchase@email.grcc.edu

What is your greatest inspiration?

Currently, my inspiration comes from my niece, Aliyah, and my nephew, Hudson. I want to help show them anything is possible if you’re willing to put in the work required, so that is a huge driver in my life. However, I owe this mentality to my mom and my best friend Danny Staten. During the early years of my life, I watched my mom work tirelessly both in her career and at home. When my mom died, Danny was the first person I met when I transferred to Newaygo Elementary. Throughout school and into adulthood, Danny constantly worked hard to succeed, while taking time to help others through their struggles. After Danny died, I shifted my focus to chasing my dreams, and that’s why I’m here today.

What is your focus as the Editor-in-Chief this semester?

My main focus as the Editor-in-Chief this semester is to provide the best coverage of GRCC news possible, while empowering everyone on the team to chase their passions and grow in journalism. The Collegiate has changed many aspects of my life personally, and I want to do my best to allow it to do the same for others.

I heard that you are, or were, a rapper. What’s your rap name? What do you rap about? Got any stories to share?

I went by youngcmoney, when I rapped. Most of the time, I was going off the top of the head, so it’s hard to say what I rap about. But I would say, mostly, about my journey in life. Rapping about cash and cars, like I was living lavishly, never felt authentic to me, when I was running out of gas regularly in my beatdown Saturn. In my mind I’ve given up the rap dream, although I still rap while driving. But because I told myself that if I didn’t release a mixtape before I was 30, it was time to hang it up, so to speak. When that birthday came and went, I made peace with the decision and tried to find a new route in life

I also heard that you are a wedding minister. What made you want to get ordained? What is the craziest experience you’ve had while on the job?

My main motivation for getting ordained was to officiate over a friend’s wedding. They were planning to have a small ceremony, meaning I wasn’t going to get the invite, and they asked how I felt about running the show for their wedding. After paying $40 to the Universal Life Church, I was a minister. I then had to cobble together a ceremony, which I managed. However, the execution of the ceremony was a different story. Prior to the ceremony, I was having a hard time sleeping due to nerves. But I didn’t practice at all, because I had bought a pair of purple Retro Jordan 1s, and was under the assumption that if I looked fly things would work out. When the day arrived, I grabbed my best button-up shirt out of the closet, to find the buttons on the cuffs were missing. I quickly had to decide between rolling the sleeves up, not even an option, and finding something to pass for buttons. I settled on twist-ties, normally used for bread, one green and one black. After borrowing my grandma’s fancy Bible, to look the part, I showed up and things started off pretty smooth. The wedding was taking place in August, so it was being held outdoors. I didn’t think about how this would factor into things. Just as I was hitting my stride, a gust of wind flipped the pages of the Bible. This caused me to lose my place on the script I had folded and was holding amongst the pages. As this happened I blurted out “shit,” which I quickly apologized for, causing laughter in the crowd and at the altar.

Lastly, do you have any big plans for after GRCC?

I want to get a bachelor’s degree in Journalism from CMU, and hopefully find a job covering local sports. When I came back to GRCC, I wanted to work on the radio at ESPN 96.1. While that would be incredible, once I get my degree, I’m not ruling out starting something for myself and trying to make a run at journalism that way.

Have suggestions about who I should feature next? Drop me a tip at 5questionsandasketch@gmail.com. I’d love to hear from you!