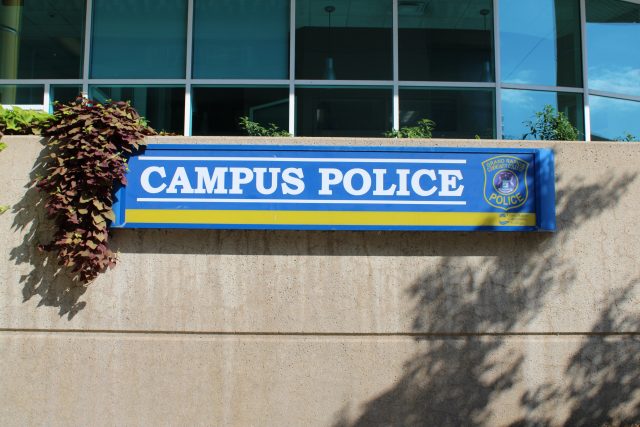 By Elizabeth Halvorson and Alena Visnovsky

Burglary at Applied Technology Center results in blood swabs and almost $4,000 in damages

On March 20, 2022 GRCC police were contacted by an employee from the GRCC facilities department reporting a break-in that occurred at the Applied Technology Center on campus.

GRCC police arrived at 11:15 a.m. and the building manager stated that when he arrived to do a building check, he noticed the fence that blocks off the construction area near the South entrance to the building was propped up against the building.

He said he had identified three areas that had been damaged, the first was the apparent point of entry from the break in. A window was broken on the southwest corner of the building in the Heritage restaurant area. The last area of damage was in a student lounge that contained several vending machines. The glass on one of the vending machines was completely shattered and a second vending machine had damage that appeared to be from being hit by some type of hard object.

There is currently construction going on in the ATC and the window that was broken near the Heritage restaurant is located in the construction area. This break in occurred between March 19 at 11 a.m. and March 20 at 10:27 a.m.

After the March 13 break in, a panic bar installed on the temporary wood door that allows entry into the construction area. This panic bar allows the door to be secured from the inside and if latched can only be opened from the inside. The building manager stated that this door was not latched when he came in on the day of this incident. He also stated the fence that prohibits entry to access the door was propped up on the side of the building and it appeared entry was made by crawling under the fence.

It appeared the suspect(s) entered the construction area and then entered the building through the broken glass in the Heritage restaurant area. There was no damage in the Heritage restaurant area.It appeared that the suspect(s) traveled through this area and made their way to the second floor of the building where they caused more damage.

The second area of damage was to vending machines on the second floor student lounge. Two vending machines were damaged. The first machine contained snacks and the glass was completely shattered. There was a plastic bag on the ground in front of the machine, it appeared that the suspect(s) used the plastic bag to wrap around their hand and then punch the glass out. There was blood on this bag which was later processed by the Grand Rapids PD forensit unit. The second vending machine did not contain any product and it appeared the suspect(s) used some type of hard object to hit the side of the machine.

The last compromised area was in the office of Art and Bev’s restaurant. A window was shattered but nothing appeared to be taken. There was a large metal pole on the sink just outside this room and it appeared the pole was used to break the window in this area.

GRPD forensics were called and they responded to the scene, they processed all the areas that had damage. They were able to obtain one partial print from the top of the damaged window at the suspected point of entry. They were also able to obtain two swabs from bloodstains. The evidence will be submitted to the Michigan State Police Crime lab to be processed.

GRCC police attempted to make contact with staff at businesses around the ATC in an attempt to gain access to any external cameras that may be present at those businesses in regards to this incident.

On March 31, GRCC police met with an employee from Life International: a business across from the ATC. They got access to two external security cameras, but did not find any footage during the times of the three break-ins that provided any clarity.

The damages from this third break-in totaled $3,836.

This case is open and currently under investigation.

Grand Rapids Community College’s Applied Technology Center was stuck by larceny for the third time in less than a month.

On Monday, March 21, GRCC police were dispatched to the ATC building shortly after 6 a.m. to address a breaking and entering complaint.

Several areas of the building and objects were damaged including drawers, desks, and a safe in Ferris’ offices, the Heritage Dining area, two stainless steel doors and other items in the Brewery Room, vending machines in the Student Lounge, and a GRCC Raider card machine near Art and Bev’s.

The total damage and theft of this break-in amounts to over $20,000.

A GRCC employee reported to police that on Sunday, March 20 around 5 p.m. he had entered the ATC to reset the UPS system and encountered an individual in the building. The employee stated that he had assumed the individual was a custodian and had not thought much of his presence in the ATC building. The employee described the individual as an african american male of average build around 6 feet tall, between 35 and 45 years old, weighing approximately 180 lbs with short black hair and wearing a blue shirt with blue pants.

This case is open and anyone with information is encouraged to contact GRCC Police at (616) 234-4010.