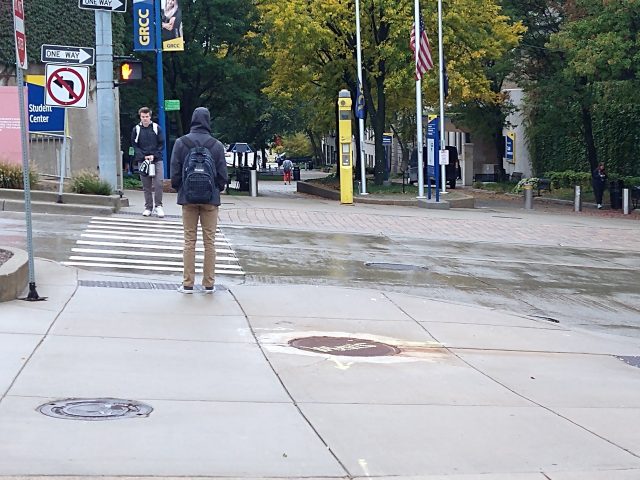 With the introduction of a new president on campus, concerns are expected from enrolled students who will be affected by this change. While several community forums will be taking place this week to better learn about these candidates, we reached out to students on campus to ask them how they’re  feeling about the search.

In late June, GRCC’s Presidential search committee, consisting of 28 community college leaders, began the process of whittling down the pool of 30 applicants. After compiling a list of seven semi-finalists, the committee sat down with each for a 90-minute interview, eventually deciding to bring three finalists to campus for a series of interviews and public forums.

Many students were unaware the search for a new president was occurring, but have a vested interest in the outcome.

While Bill Pink, GRCC’s former president, left the college after being named president of Ferris State University following a closed search that was conducted in secret, the search for GRCC’s next leader is public- at least for the top three finalists.

Esther Carpenter, 20, of Newaygo, appreciates that the final leg of GRCC’s search for a new president is being carried out in public.

“I think the information (about the finalists) should be readily available for those interested…” Carpenter said “I hope that each one is dedicated to continually improving GRCC’s systems of support for diversity, growth, and overall student success, while also caring about the school’s workers.”

One concern many students shared was the possibility of a change in the price of tuition, although college presidents don’t typically set tuition on their own. This is something the GRCC Board of Trustees votes on after a recommendation is made by the finance department.

“I ideally would like tuition to keep being affordable,” said Kaitlyn Olsen, 19, of Rockford.

If any changes were made to tuition, Martin Ronero, 19, of Jenison, said that he hopes it will “help with tuition for students, and keep things going the way they are.”

The electrical engineering student went on to explain how tuition is less affordable to students who live outside of Kent County. A change in tuition would be “helpful for out-of-county people because I know it’s a little different for (non-Kent County students) than people in Kent County,” Ronero said.

“(The new president) should put more emphasis on (mental health), and that it is important so people are actually more aware of it,” De La Cruz said, adding that advertising about GRCC’s mental health services could have a positive impact on student’s mental health.

While some students who have been out of the loop, may be apprehensive about the leadership change, B. Afeni McNeely Cobham emailed a statement on behalf of the Office of Diversity, Equity and Inclusion assuring that the candidates were selected based on their “diverse ideas, values, and lived experiences.”

In the email, McNeely Cobham stated, “I had the honor of serving on the screening committee for the presidential search process. The experience was arduous yet rewarding and insightful. The semi-finalist pool was abundantly diverse, with candidates that outwardly represented historically underserved and underrepresented communities. After a thorough review of credentials, expertise, and thoughtful deliberation, I can assure the GRCC student body that the three finalists visiting us next week were selected because of their diverse ideas, values, and lived experiences.”

McNeely Cobham also mentioned that the interview process would include a panel session titled Justice, Equity, Diversity, Inclusion and Access. “Lina Blair, Director of Student of Life, and I will co-moderate that session. I invite students to attend and engage the candidates in topics important to our community.” These sessions will run from 9:45 a.m. to 10:30 a.m. during each finalist’s campus visit.

Students who wish to learn more about the presidential finalists are welcomed to join several community forums and public interviews that will take place in the Applied Technology Centers later this week. The community forums will take place from 2:30 p.m. to 3:30 p.m. followed by the public interviews from 3:45 p.m. to 5:15 p.m. Blacklaw will be in attendance on Oct. 18, followed by Lepper on Oct. 19 and Casper on Oct. 24.