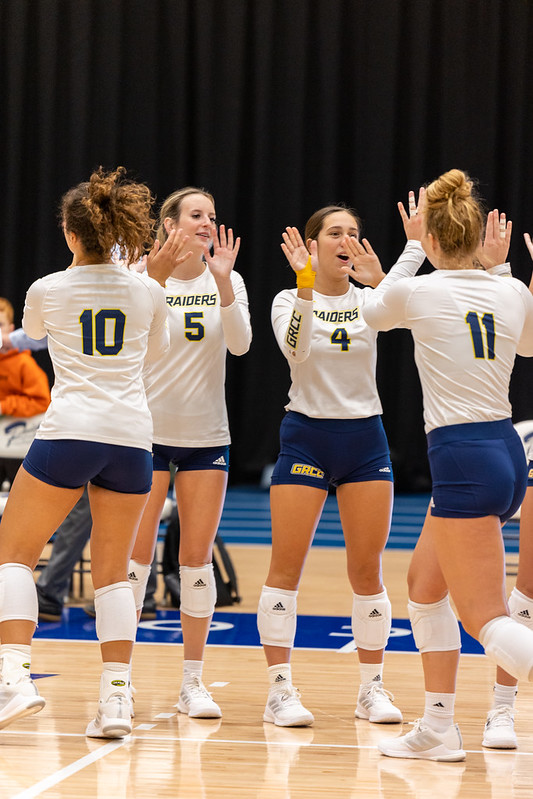 The Grand Rapids Community College volleyball team traveled to Mott Community College for the MCCAA tournament this past Saturday, Oct. 29, and defeated Lake Michigan College in three sets and MCC in five sets. This was the Raiders sixth-straight tournament championship appearance.

“The team knows what is at stake the rest of the season so having these few games before Regionals is crucial,” head coach Chip Will said. “I was very impressed with the team’s performance and especially how they responded in the second game against MCC.”

The Raiders faced Lake Michigan College their first game of the tournament. They overwhelmed the Redhawks as soon as the game started and won in dominating fashion 25-6, 25-15, and 25-13. GRCC pressured the Redhawks, having 40 kills, nine aces, and seven blocks.

Other notable stats include sophomore Shannon Russel spreading the love with 25 assists and Thelen, sophomore Karissa Ferry, and sophomore Alena Visnovsky all having three blocks.

Soon after their first match, GRCC faced off against 21-9 Mott Community College. The Raiders were challenged throughout the first and fourth set, but were able to overcome it and won 24-26, 25-21, 25-16, 21-25, and 15-12. In the first match, the Raiders were able to overwhelm their opponent with their offense, but this matchup would bring more of a defensive presence.

Visnovsky led the way for the Raiders with seven blocks and Hecht added six blocks of her own. Headed to the offensive side, Russel had a whopping 66 assists with Torres having 22 kills and Thelen adding 21 kills.

After the two victories, GRCC improves to 20-3 on the season and moves on to their regional matchup where they play the winner of Schoolcraft/ Southwestern Michigan college. This regional matchup will take place on Thursday, Nov. 3, at SC4 Fieldhouse in Port Huron. If the Raiders are able to make it through regionals, they will advance to the multi-day nationals tournament in Iowa.