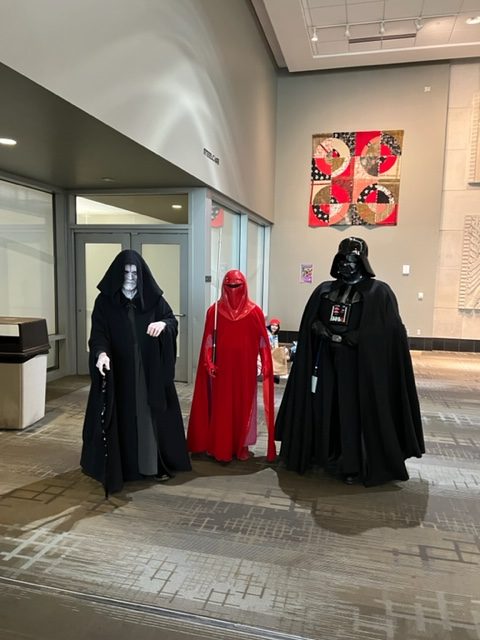 Greetings Nightlighters it is I, the kooky and crazily enthused lover and aspiring writer of comics Jamie Miller here with my yearly Comic-Con review. Every year I look forward to it like a little kid does Christmas or a couple does Valentine’s Day. I live for it, come alive during it. And this time was no different.

Though I only went on Saturday, what a Saturday it was. The cosplay per usual was on point, some of my favorites being a gigantic Jack Skellington, a Darth Vader and Palpatine complete with a royal red guard, and a Leeloo and Korben Dallas cosplaying couple.

I had the pleasure of meeting up with the aforementioned cosplaying couple, two women by the names of Alex and Rinoa Page. The two women among other things make “Legend of Zelda” style tarot cards and other specialty pop culture cards, one of them being referred to as PokerMon which are regular cards but in the style of “Pokemon” so that in Alex’s words “you can play regular card games with these.” They also had “a deck for basic Pokémon of the first gen, and some of the legendary birds.”

And we then got off topic discussing Star Trek and Gene Roddenberry.

I also had the pleasure of meeting Sarah Robson and Jason Smith aka Asenath Ren and Arkham respectively, the two were members of the cosplay group the Mandalorian Mercs. As the name suggests they cosplay as Mandalorians, in the words of Robson, “We are a Star Wars costuming club.” And if you’re wondering what that entails, she explained, “We build custom Mandalorians and canon Mandalorians. We build them from scratch, each one you see is unique.”

But they don’t just build them to sit on a shelf and collect dust, oh no. According to  Robson they use them to raise money for charity. This time they’re donating to Toys for Tots, a cause any warrior would willingly join.

I later had the absolute privilege to talk too Lenore Zann known for voicing Rogue in “X-Men: The Animated Series” and she was just a blessing to talk too and seemed happy just to be here in not so sunny Michigan “The people are lovely and I intend to take an extra day at the end of the convention to get around and see as much as I possibly can.”

She also told me something I never knew when I asked what her favorite role was, that being she worked in theater.

“In live theater, which I’ve done a lot of, I played the role of Marylin Monroe the doomed sex goddess,” she said.

Overall, she was just so much fun to talk to, second best thing at the show. The first thing of course being the cosplay. All in all, a phenomenal show 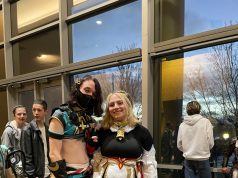