This past weekend Grand Rapids Comic-Con, a yearly con full of independent artists, comics, and voice actors, took over DeVos Place. One of the most memorable parts of the event was the attendees’ participation through cosplay.

Cosplay is the act of dressing up as a character from a movie, video game, or TV show. Many attendees of the convention took part, dressing up as characters from popular movies and tv shows.

Cosplayer Amelia Justice cosplayed her build-your-own Warrior of Light from Final Fantasy. Creating the dress, horns, bracelet, and tail herself, Justice said, “the creative side of me just blossomed.”

John Juhala cosplayed Doc Oc from “Spiderman 2.” After being sent home due to COVID-19, Juhala’s love of Spiderman led him to recreate the iconic villain. Taking 60 hours to design and build, his first cosplay utilized pool noodles, insulation foam, and gun holsters to hold the frame together.

GRCC student Alyssa LeHuis and partner Kyle Holt cosplay popular Genshin Impact characters Gorou and Ganyu. After the videogame gained popularity in 2020, the couple was able to buy their cosplays online. LeHuis said she cosplays because, “It looks cool, and I wanted to try it.”

Every year attendees are encouraged to cosplay their favorite characters and this year was no exception. 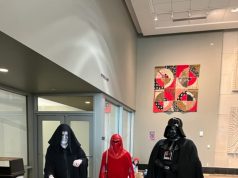 Comic’s forever: A review of Saturday of the 2022 Grand Rapids Comic-Con