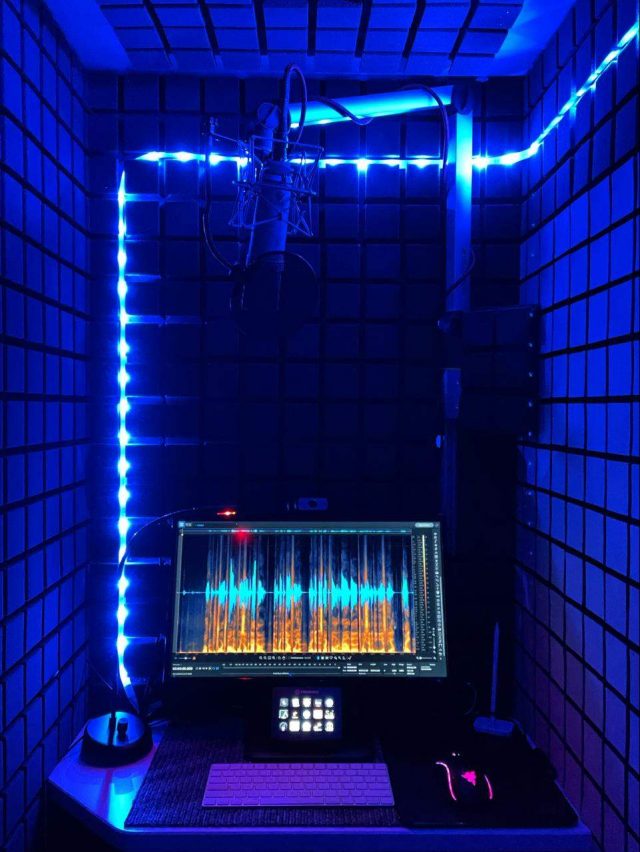 Voiceover work is a constant in our world – from audiobooks, to commercials, to TV announcers, to voice actors in cartoons, games, and anime, you’d be hard pressed to come across a modern form of media without it. To those who are interested in voiceover work but don’t know where to start, the sense of competition and scale can be very daunting. Thankfully, Grand Rapids Voice Over and its owner, George Paulin, have some tips for newcomers to ease their worries.

But first, a bit about Paulin himself. Paulin grew up in Los Angeles and went on to get a degree from a recording school in San Francisco for audio engineering. When he graduated, he went into voiceover work for a time, doing work for audiobooks, but wasn’t a particularly competitive person. After a time, he ended up moving to Chicago and working on audio with some local music groups, namely orchestras. He would marry and have kids before moving to Grand Rapids, to live closer to his wife’s family, and set up shop. He has been in Michigan for five months, and says that he loves it, quote, “This is home base for good.”

When speaking about voiceover work and recording, he can’t stress enough that the field is very competitive.

Having a background in audio work is very helpful for the job, as well as lots and lots of practice. He suggests that, instead of waiting, that anyone interested in the field should just jump in, work hard, and stay confident, because the field is more accessible than it ever has been thanks to computers and equipment being more widely available and the pandemic allowing voiceover workers to record from home.

When it comes to practice, Paulin says that you need three good things: good acting, good business, and good equipment. It’s all a lot to consider, like classes for acting, help with selling your voice, or better audio equipment, and not to mention knowing which of the many fields of voiceovers fit best for a person, but he suggests figuring out through trial and error – even with a cheaper USB mic, because “It’s not something you can learn in one day.”

Experimentation is key, and a good place to experiment is a recording studio, such as the one Paulin owns. Renting out a studio for recording has varying costs depending on where it is or who owns it. In LA, it could be up to $200 an hour. Here in Michigan, however, it’s a much more reasonable $35-$60. Either way, getting used to recording at a studio and talking into a mic is something he suggests greatly to anyone interested, so they have the experience they need.

Audio recording requires audio equipment as well, and Paulin suggests you start small – as mentioned before, a USB mic isn’t exactly professional, but it’s good for starting out. As you get better, improve your audio equipment to a professional standard. If you intend to set up a studio at home, he suggests finding a room with the right acoustics and finding any foam or other things you may need at a store like Guitar Center. In terms of recording software, he personally uses Pro Tools and Logic Pro, as he also records music, but for voiceovers he suggests using Audacity instead.

There are a lot of hurdles and hardships with going into voiceover work, but Paulin says perseverance and practice is key. As long as you have the determination to improve, you can. And one day, that determination may just pay off. In Paulin’s words, “Just don’t let your fear stop you now.”