For students interested in getting hands-on filmmaking experience, joining the new GRCC Filmmakers Club is a step in the right direction.

According to co-founder and President David Velick, the club not only brings people together who are interested in filmmaking but also gives students real experience that can be used when transferring to another school or university. 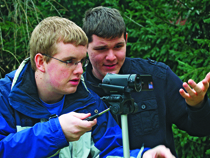 Every Monday from 3 to 5 p.m., members of the Filmmakers Club meet to discuss everything from upcoming film projects to what’s going on in the major film and movie world.

There is no prior film experience required to join the GRCC Filmmakers, just an interest in filmmaking.

If you’ve seen the posters and ads for the Filmmakers Club popping up on bulletin boards across campus, then you may be aware that the club is in the early stages of a new short film titled “Stephanie.”

“Lately we’ve been holding auditions for “Stephanie” at our meetings on Monday,” Said Velick.

“Stephanie” will be a short, ten to fifteen minute film, with the majority of the shooting being done on GRCC’s campus.  According to Velick, “Stephanie” will follow the mental breakdown of her ex-boyfriend.

Velick has had an interest in filmmaking since his junior year of high school.  In the past years he has had the opportunity of aiding in the production of amateur and professional films.  Velick was a PA (Production Assistant) for the Grand Rapids Lip-Dub as well as the Baliwood production of “Spirit of Mumbai.”

With the creation of the GRCC Filmmakers Club, Velick hopes to take his experience and knowledge of filmmaking help others to gain experience as well.