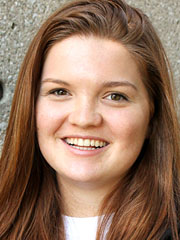 The debate that is currently going on in the art world today is of the art sculpture “La Grande Vitesse,” also known as the Calder by locals, being the canvas to another one’s art. David Dodde, an Art Prize contestant, put magnetic flowers on the Calder as a way of paying homage to Alexander Calder, the creator of the sculpture. Though, due to criticism from the Calder Foundation and the Calder family, Dodde has been told to take his magnets off.

I agree with the decision to have the artwork taken down. I, personally, find Dodde’s work offensive and disrespectful. Alexander Calder died over 30 years ago and putting another piece of artwork on top of his own work is disgraceful.

The other day, I overheard a group of people talking about the Calder. A majority of the group took the side of my colleague Shelby Corliss, which is to say, they really saw no problem with the magnets. A person in the group even said, “But isn’t it Grand Rapids’ choice; I mean, they own the sculpture.”

Yes, the city of Grand Rapids does own the Calder, but to say it’s okay is like saying it’s okay for someone to put a magnetic mustache on the Mona Lisa because the Louvre Museum owns it. It’s unheard of and considered insulting to Leonardo da Vinci, the man who created the the Mona Lisa. The same can be said about the Calder.

I know some of you are probably thinking that it’s a different situation. Maybe you think the Calder is just a pile of metal. Well, thankfully I can tell you that you’re wrong. I have taken Art History classes at Grand Rapids Community College and one of the main things I have come to learn is that a single piece of artwork can tell us so much about a time period and who lived during it.

Like it or not, the Calder is a work of art, and, whether or not you agree, it does define a generation of people. Calder actually created the art form of mobiles. He has been an inspiration to artists world wide. I don’t want to see that years from now people study what Dodde did to anger so many art critics and historians, instead I want to see and hear about people studying the Calder because it was different and more unique than most pieces during that time.

Another statement that I over heard was, “Well, they’re just magnets. They do come off.”

Again, this is true. They are only magnets, they can and do come off easily and without any damage to the sculpture itself, but that’s not the problem. The problem is the disrespect the artist has shown with his ‘homage to Calder.’ By not first asking the living relatives of Alexander Calder, Dodde not only shows a lack of concern, but also a disregard to the family’s rights and wishes.

Overall, I do agree with the city’s decision to have the sculpture taken down. I do believe that every work of art should be respected and honored. I mean this is ArtPrize, people; we should be respecting the art, not defacing it.