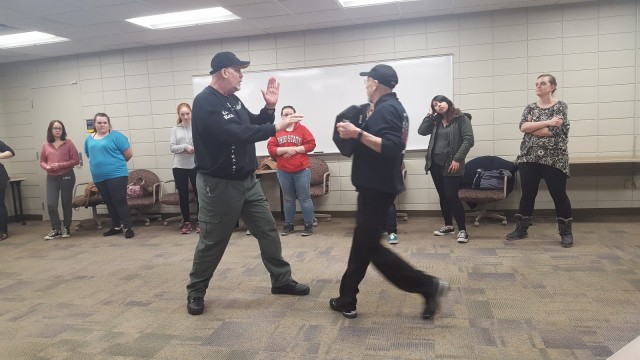 On Friday April 7, the Grand Rapids Community College Student Life office held a seminar to teach students how to defend themselves in any kind of assault situation.

Kenny Duke, a former student, was informed that seminars like this have been increasing and set out to plan one for GRCC students. He planned the seminar with Student Life at GRCC and asked his friend, Terry Gay, who is a defense instructor and martial arts master to teach the audience how to protect themselves.

Although there were only a handful of attendees, the three and a half hour long seminar began with Kimberly DeVries, the Coordinator of Title IX, talking about what Title IX does on GRCC’s campus and what resources they offer.

The purpose of Title IX is to make sure students and faculty follow the campus rules regarding sexual harassment, assault and others. To learn more, visit Title IX’s webpage.

Next, Gay presented a powerpoint about how to stay safe in everyday life. A few of the slides that he presented were about home safety. Many of the points that Gay made were small details that many people wouldn’t think about, but things that burglars look for.

He also spoke to the group about giving away names and addresses.

“If someone wants to find your house, all they have to know is your name and they can find you.” said Marvin Lowell, Gay’s martial arts partner.

Attendees were given simple precautions such as maintaining the lawn so the house doesn’t look vacant and covering garage windows and closing drapes and blinds in the house so no one can look inside to see valuables. Another precaution is not keeping a ladder outside because that could be used to get into a house.

Gay mainly talked about assault and how someone can protect themselves during any type of assault.

“The first thing that you can do to protect yourself is to be aware and look tough,” Gay said. “People won’t go after a man or woman who is looking around at their surroundings, they‘ll go after someone who is looking down at their phone and not paying attention.”

On the subject of walking to a car and where a person parks their car, Gay advised everyone to have their keys ready in their hands. It allows for quick entry into the car if someone is waiting for the driver and if needed, can be used as a weapon.

Gay told a story about one of his female students who was walking to her car at night. She noticed a few people around in the parking lot and had her keys ready in her hand. When she saw them approaching her, she was able to quickly unlock her car, get in, lock it and drive off before anything could happen to her.

Gay also advised people to park under a light if possible at night so it will deter someone from attacking. Another way to be be aware and safe is to look around and observe the cars that you parked by.

Another thing Gay mentioned was that in many cases, people won’t help someone who is getting assaulted. If there is a group of witnesses, many will say that they didn’t help because they assumed the other witnesses would help.

Gay said this to emphasize the fact the someone has to be aware and prepared for anything because in most cases, a person is assaulted with no one around.

The seminar was small which allowed time for the women who attended to share how they didn’t think to do small things that most people wouldn’t think of doing like maintaining the lawn or checking out the other cars around them.

For the rest of the seminar, both Gay and Lowell demonstrated defensive moves and strikes that someone could use to defend themselves.

The first move would be to look strong and confident when being approached by someone. Shout at them loudly to stop and leave and make a lot of noise.

“One thing that many people don’t know is that men who go out to assault people often wear cups,” Lowell said.

Because of this, the women were taught how to knee an assaulter correctly, but were also taught relatively simple strikes that could break the person’s nose and push them away. To learn some basic defensive maneuvers, here is a link to a short self-defense video.

The next attack that was discussed was if someone is in a situation where they are being choked. When in a choke hold, the victim needs to be quick since it only takes about 30 seconds to stop air supply to the brain and five seconds to stop blood flow.

The victim should shove the hand around their neck to the side and strongly push the attacker away with their other hand.