Blood, sweat, and tears most literally apply to the seven-week project that the Grand Rapids Community College culinary students took on for the Devos Performance Hall. With the cakes and pastries unveiled on Dec. 5, the Nutcracker themed display will remain up until Dec. 22.

After several weeks of tedious work, The Collegiate interviewed Chef Gilles Renusson and his culinary students following the unveiling on Thursday evening.

“It was just incredible that we were able to do this,” said culinary student Isabella Patterson as she cleaned alongside her classmates in the program’s kitchen.

“I don’t think that many of us would do it again because of the amount of work, though.”

When asked about the intensity of the project, there was no doubt that the students had to put excess work into their course to make the display ready for deadline.

Despite the challenges that the students had faced in the past seven weeks, the classmates had a strong opinion on their close bond of their “family” relationship with other peers.

“We are a family, we are passed just being friends,” said student Ana Sorge as she helped Patterson in the kitchen. “I have no doubt that a few of my classmates will still be people I’ll be in contact with for my adult life. That’s what makes this program so unique.”

While more cleaning needed to be done, The Collegiate then asked Chef Renusson about his experience working on the Nutcracker display. 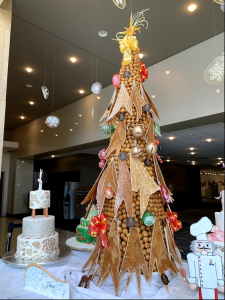 “It was possible because the students really paid attention and were really motivated,” Renusson said. “If the students wouldn’t have been as motivated and as inspired as they were, it would not have been possible.”

“This program is more than just cooking,” Patterson said. “We have a family here, and we work really hard together.”

With the Christmas spirit in mind, you can check out the entire display of sweets, which features a croquembouche tree, sugar fairies and wedding cakes, at the Devos Performance Hall until Dec. 22. The Grand Rapids Ballet’s production of ”The Nutcracker” will also run several shows throughout December in the same location, and you can find more information about it here.

GRCCtv created a video highlighting the installation process. That can be found here.

Editor’s Note: This story was updated Dec. 12 to include photos taken by The Collegiate staff.